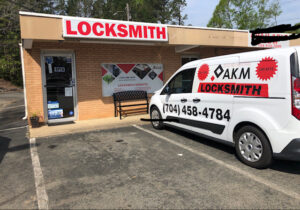 Most of the time, a strong lock is a good thing. Once you’re locked out of your car or your house, however, it’s easy to regret your choice of lock. The next time you’re in need of car locksmith or residential locksmith in Charlotte, contact AKM Automotive Locksmith.

Driving to Our Office

If you’re coming from the west, take NC-51 N/Pineville-Matthews Rd until you get to Providence Rd, at which point you’ll take a right. Take the first right into the shopping center, and you should see our office on the right.

If you’re driving from the east, take NC-51 S/Pineville-Matthews Rd until you reach Providence Rd, then take a left. Take the first right into the shopping center, and you’ll see our locksmith office on the right.

Settlers of European descent first came to what is now the Charlotte area in the middle of the 18 th century. The settlement became known as “Charlotte Town,” after Charlotte of Mecklenburg-Strelitz, queen consort of Great Britain at the time. The town was particularly tenacious during the American Revolution—General Cornwallis of Great Britain famously called it “a hornet’s nest of rebellion.”

Today, Charlotte is home to nearly 800,000 people, making it the largest city in North Carolina. Charlotte is a major U.S financial hub, and several large banks have their regional headquarters in the city. There are also many colleges in the area, including the University of North Carolina at Charlotte, Davidson College, and Queens University of Charlotte. The city is home to two major sports teams—the Panthers of the NFL and the Hornets of the NBA.